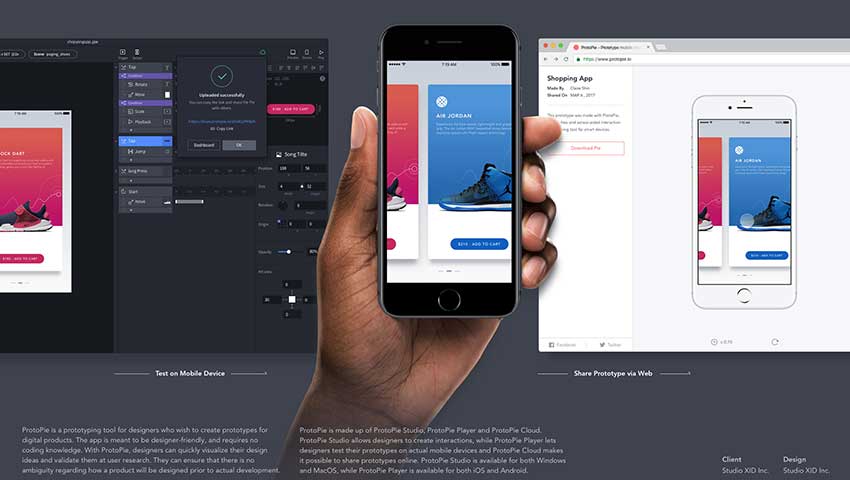 This tool enables you to create quite complex interactions and get pretty close to how you would want your design to work. Perhaps the most standout feature is the ability to control the sensors of smart devices in your prototype, such as tilt, sound, compass and 3D Touch sensors. Depending on your project, this is a great tool for encompassing native app features. It's easy as pie with no code required.

ProtoPie is a prototyping tool for smart devices. ProtoPie makes elaborate prototypes possible without any coding, and these prototypes can be tested on actual devices.

create a variety of interactions without the help of developers.

ProtoPie’s concept model is based on how objects move in the world instead of programming. ProtoPie allows users to generate Interactions with Objects, Triggers and Responses. Objects are the assets that will be moved or otherwise affected, Triggers are those that will move or change the Objects, and Responses are the changes that the Triggers create.

The tapping action for the Objects is the Trigger, and the resulting movement of the Object is the Response.

There are many reasons to use ProtoPie. Here are four major advantages.

ProtoPie has a concept model that can be intuitively understood. Moreover, ProtoPie features a user interface similar to that of other graphics tools, allowing users with designing experience to quickly become accustomed to ProtoPie.

ProtoPie allows users to create sophisticated prototypes without any code. Interaction Pieces in the forms of Triggers and Responses take the place of complex code as part of creating fullly featured prototypes.

ProtoPie supports simultaneous multi-touch input, making possible prototypes featuring interactions with two- or three-finger inputs. Moreover, ProtoPie can use the sensors built in smartphones to create prototypes that are more complex than on-screen prototypes and allow for communication among different devices, as well as prototypes for service design.

ProtoPie allows designers to test prototypes on actual devices, and that too on multiple devices simultaneously. ProtoPie can be used in a variety of scenarios, such as developer meetings or audience trials.

Layers can be used in ProtoPie just like other design tools. Vector layers like rectangles or ovals can be added, moved and resized freely just like how designers can do so on currently existing design tools.

You can use the output from a camera in your smart device as a layer. This works when you run your prototype in ProtoPie Player. A placeholder is shown instead when you run the prototype in the preview window or browser.

You can directly insert text in ProtoPie.

If a font used in ProtoPie Studio is missing on the running device, a “missing font” alert will pop up. Alternative fonts can be selected to replace the missing font.

An input layer is a layer that you can use for entering text using a native keyboard on smart devices or a physical keyboard.