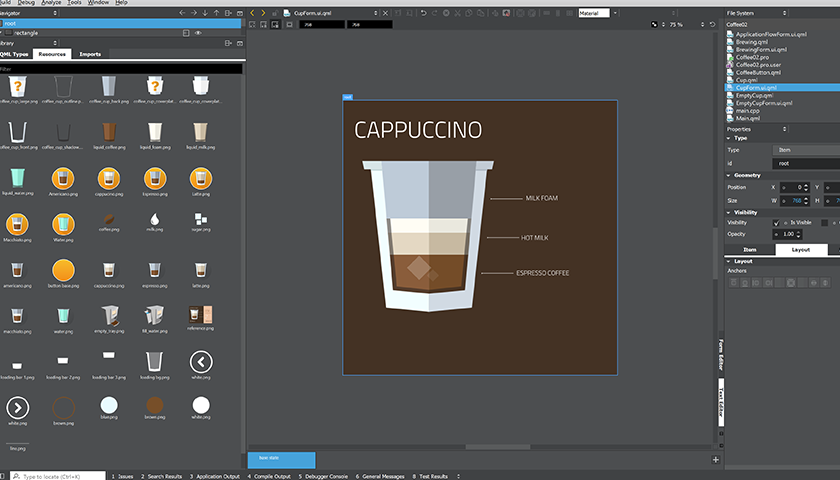 Qt cross-platform SDK. It offers cost-effective design, development, and deployment. It allows developers to deliver the best user experience across all devices.

Qt is much more than just a cross-platform SDK - it's a technology strategy that lets you quickly and cost-effectively design, develop, deploy, and maintain software while delivering a seamless user experience across all devices.

If you write your application in C++ and Qt, you will result in part of Windows RT, Android, and iOS codebases. However, if you want native app experience, cross platform user experience is different. Now, the Qt developers are working on it.

Certain domains cooperate in an easier way with C++. It is not a problem with effectiveness or speed, but some systems, like books or libraries, work better with C++. Java or Obj-c have less image processing resources than C++.

Certain domains cooperate in an easier way with C++. It is not a problem with effectiveness or speed, but some systems, like books or libraries, work better with C++. Java or Obj-c have less image processing resources than C++.

QT isn’t simply a user interface library, so when you want to write an app for Windows and QT, you will write it in C++ and it will be uncomplicated to change it to work with Android, as there exist cross-platform modules, like database, media playback, networks, and so on. It is vital for testing. The support of docs and tools are on a good level as well.

Lack of platform support is one of the main problems in Qt. For instance, when you want to have particular feature on Android and it is not included in Qt, you must cope with JNI, and this is a trouble, because it evokes the set of complications.

Bad news for advertising support. Official Qt support for main Ad Networks doesn’t exist. You may find something related to it only in unofficial libraries. The bad thing is that, sometimes, you can find information for Android, but for iOS or WinRT, it is a hard task.

Problems with user experience in mobile versions can occur. It is okay when it comes to desktops, because there are more templates for this. With the mobile version, it gets more complicated, because for iOS and Metro, there are no profound libraries, though the general material support is great. As a result, you will need to write lots of platform specific things.

This object-oriented cross-platform framework comes with Qt Creator – its own Integrated Development Environment (IDE) that runs on Linux, Android, Windows, OS X, and other systems. It provides developers with all the functionality required to build cross-platform software. Considering the fact that Qt uses C++, it is entirely object-oriented and supports extensible and true component programming. GUIs can be written directly in C++ using its Widgets module, as it comes with Qt Designer – an interactive graphical tool that is integrated into Qt Creator.

Main features of Qt Creator are worth mentioning:

Qt cross-platform software development network uses C++ (on a server side) along with QML (on the front-end side). Qt QML is a specific programming language (Qt Meta Language) which is similar to HTML. It is used to create cross-platform libraries and applications. Qt QML provides both QML and C++ Application Program Interfaces (APIs), which enables app developers to integrate QML code with JavaScript and C++.