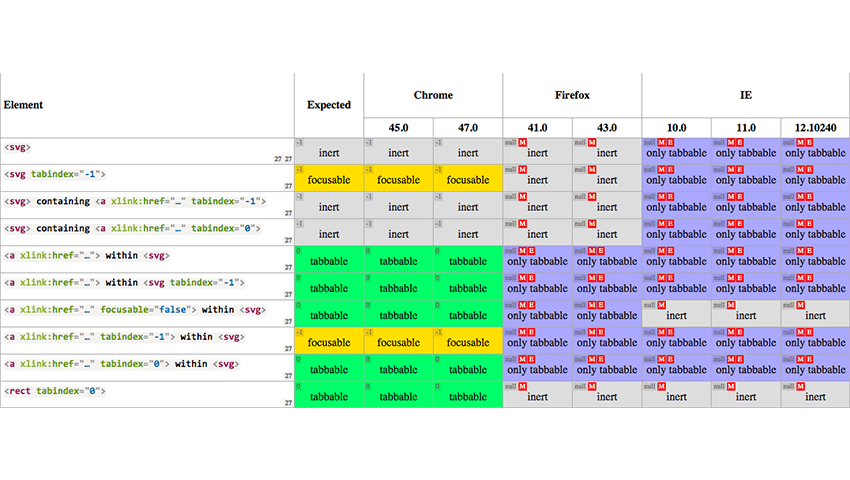 No list of web development tools would be complete without at least one accessibility tool. Accessibility is one of those often-neglected aspects of design and development, and ally.js can simplify it for you.

ally.js is a JS library that gives you fine control over focusable and non-focusable elements. For example, using its API you can prevent elements outside a modal window from receiving focus until the modal is closed. You can also find out exactly which elements are focusable or tabbable, and identify focus changes within the shadow DOM.

Two other powerful features are the ability to determine in what manner focus has changed (keyboard, mouse, etc.) and when an element is focusable and physically visible on the screen (this can help to avoid page scroll).

JavaScript is everywhere. If you are able to read this article or browse through your Facebook news feed, it is mostly due to this single technology.

One of the most popular programming languages and a dominant web development technology, JavaScript has been around for over 20 years now. Being initially bound to front end engineering, the language has seen even more growth in popularity after an ability to use it on the server side was represented. Ever since there has been a heated discussion going on about the use of full stack JavaScript.

What Is Full Stack Development?

It is almost impossible to create a full-fledged software product using only one technology. This usually involves complete tech stacks – Standard combinations of tools and programming languages. As all software products consist of the client side and a server, there are usually two separate stacks that cover each of the layers. However, there are approaches that can be used to build web or mobile applicationfrom A to Z. These are called full stack development.

LAMP has been a popular choice for web development since 2000 due to its open-source nature and Linux’s friendliness towards developers. It includes Linux operating system, Apache web server, MySQL database, and PHP application software. Recently, LAMP stack has been slowly transforming into LEMP, with more and more developers replacing Apache web server with NGINX. Although Apache is used by the lion’s shareof existing websites, it’s taking losses while NGINX is rapidly growing.

LAMP/LEMP stack is easily modified, traditional, secure, and free – a great choice for enterprise apps and prototypes that often require a high level of customization along with cost-effectiveness. With the full access to the source code and an ability to mix and match components of the stack, developers gain great flexibility and can make custom choices depending on each specific application.

The biggest argument against the LAMP stack comes from it’s fragmentary nature. The mastery of LAMP requires learning a few unrelated languages – the problem solved by the MEAN stack that’s running fully on JavaScript. We’ll talk about it further in the article.

As a versatile stack running on a uniform language, MEAN is a preferred technology for startups, often called an evolved version of LAMP. Among the companies embracing the MEAN approach are Uber, Google, Netflix, and PayPal. We’ll talk more about the benefits and drawbacks of this stack and JavaScript development on the whole in the main section of the article.

Often called just Rails, this web development framework uses Ruby as a programming language and its own default database called SQLite with various compatible web servers such as Apache, NGINX, Passenger, or WEBrick. According to GitHub’s year in review, Ruby is 4th most popular language of 2017, and Rails augments it and makes it possible to write a website on Ruby. Rails owes a part of its popularity to Ruby – the language’s clean syntax helps you build complex websites quickly and happily (at least, that’s how the Ruby’s creator would like developers to feel).

Rails is especially popular among startups due to various reasons. The abundance of shareable software libraries called RubyGem allows businesses to develop rapidly using free and existing components. Also, simplicity that lies in the foundation of Rails’ philosophy is expressed in such principles as Convention Over Configuration and Don’t Repeat Yourself that minimize your code and help you make less decisions.

Instagram, Mozilla, Bitbucket, and the NASA’s website are all powered by this Python-driven environment. With the attention towards such technologies as machine learning and big data that majorly rely on Python, the language popularity is steadily growing, according to TIOBE and StackOverflow. Django follows the “batteries included” approach meaning that all of its functionality already comes with the framework and doesn’t require additional libraries. Thanks to this, Django relieves you from making many choices and makes it possible to create news, blogs, or eCommerce stores with its abundance of default tools. With its broad range of tutorials, a supportive community, and a clean and rapid development experience, Django is perfect for starting Python programmers. If you want something different from what this stack can offer, look into smaller packages such as Flask and Pyramid, each with its own level of flexibility and best use cases.

You may have noticed that the aforementioned stacks are not offering any default front-end solutions. The reason for that is that the frontend part of the system is much more versatile. Developers can use a variety of frameworks for front-end regardless of the chosen stack, each created for their own use cases in mind. You can consult our article on ReactJS and React Native and Angular for the deeper view of their pros and cons, and compare four more full stack JavaScript frameworks to make the best choice for your project. Aside from that, you can check out such tools as Bootstrap or Semantic-UI, created with a bunch of premade elements for quickly building responsive products.

Aside from choosing between the existing software packages, you can compose your own stack by looking at the technology used by popular websites and applications. If you want to build a new Yelp or Reddit, check out the portals like StackShare and TechStacks for the lists of all main technologies applied.

While to operate with the LAMP package a full stack engineer needs to know a few languages, it’s not always the case with full stack development. JavaScript alone can be used across all software layers. Therefore, a person who applies the language for both front end and back end programming is called JavaScript full stack developer. Taking into account the undisputed popularity of the programming language, such engineers are probably the most sought-after specialists in web development.