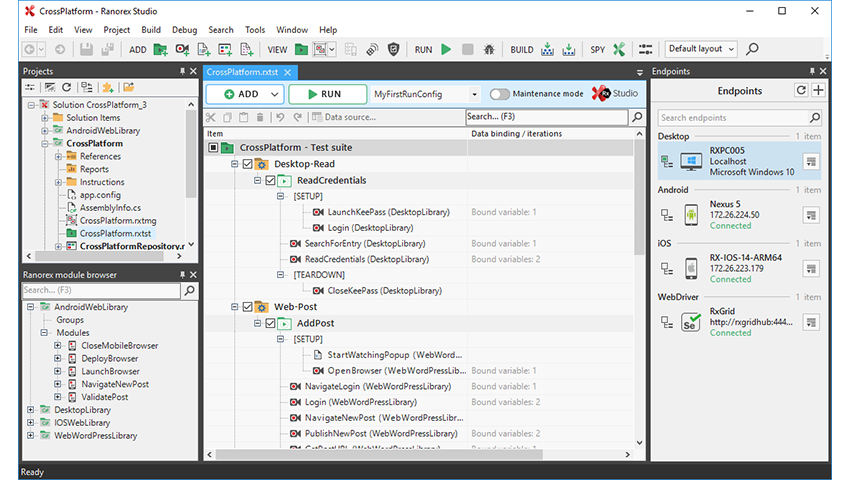 The Graphical User Interface (GUI) – the look and feel of the application – is the first thing that catches a user’s eye. And, as a result, it’s what the app is judged by. Therefore, it’s vital to ensure proper GUI functionality and seamless interaction. This can be done by testing the GUI from a user’s perspective.

GUI testing is performed to verify the features visible to a user, like menus, buttons, icons, text boxes, lists, dialog boxes, etc. It also makes sure that the appearance elements, such as fonts and images, comply with the design specifications. GUI testing takes place at the system testing level. To find out more about the levels of testing, visit our software testing whitepaper.

Automating GUI testing can be very tricky and user behavior is complex. Consequently, it makes sense to use a ready-made GUI test automation tool. We have already elaborated on the pros and cons of the Selenium test automation tool. In this article, we will focus on another popular automation framework, Ranorex Studio.

Introduced to the market in 2007 by Ranorex GmbH, an Austrian software development company, Ranorex Studio is a commercial Windows GUI test automation tool that provides testing for desktop, web, and mobile apps.

Ranorex doesn’t use any specific scripting language, it is built on Microsoft’s .NET platform. The framework supports standard programming languages C# and VB.NET to edit recordings or create custom tests.

Ranorex is based on the XPath query language enabling easier and more efficient search of components in a web-based application. The Ranorex record and playback interface allows for automating UI testing by recording UI actions. Making testing way simpler with its codeless approach, Ranorex is definitely a go-to framework for a beginner.

Ranorex Studio is one of the most comprehensive automation tools on the market as it provides solutions for multiple environments, devices, and applications allowing for automated testing of any desktop, web, or mobile software. That said, Ranorex is considered more suitable for web-based applications.

With Ranorex you can run automated tests for web and desktop applications as well as mobile apps, while competing products such as Selenium and Katalon Studio don’t support desktop testing, and Watir aims at web testing only.

Ranorex Recorder with its drag-and-drop interface allows for conducting script-free tests applying keyword-driven testing.  Once keywords are set by technically experienced team members, no programming background is needed to create and maintain automated tests with these keywords. Consequently, tests are easy to read and fast to design, since keywords can be reused throughout test cases.

While the former option can be followed without writing a single line of code, the latter one is more advanced as it requires basic programming skills.

As we can see, Ranorex codeless testing allows non-programmers to apply test automation to their projects. Selenium, on the other hand, requires solid programming knowledge, which leaves non-technical testers behind.

Given its user-friendly UI on top of the code layer, Ranorex is considered one of the most approachable test automation tools on the market. In addition, Ranorex Help Center offers a variety of resources to ease the first steps of working with the framework:

Ranorex Studio does a good job in facilitating the workflow with their tool, compared to other providers. In particular, Selenium courses and tutorials are supplied by third parties.

Ranorex smart object identification technique is able to automatically detect any change in the UI. It includes the following GUI recognition elements:

While Ranorex offers image-based automation, Selenium, on the other hand, doesn’t provide such feature which requires you to either use another library or do it manually.

According to user reviews, Ranorex customer service is professional, helpful, and quick to reply.  The reviews show that 10 out of 48 users mention the timely support and comprehensive response provided by personnel through the Ranorex forum.

However, some users claim that the support provides only standard answers and the only way to resolve complex issues is to allow the Ranorex support team to connect directly to the user’s machine. This may be forbidden by corporate data protection policies.

Ranorex is a licensed tool, which can be a considerable drawback taking into account many open-source competitive alternatives such as Selenium, Katalon Studio, and Watir. Ranorex is expensive, but it can be cost-effective in the long run given the number of features it supports out of the box.

– Only a few supported languages

While Ranorex provides flexibility in terms of platforms and browsers, it supports only two scripting languages: C# and VB.NET, unlike Selenium that allows for coding with ten popular programming languages.

Although Ranorex now supports web testing of Mac apps integrating with Selenium WebDriver, the framework still can’t be launched on macOS. Ranorex is built on .NET, which doesn’t run on macOS unless using the cross-platform Mono project. However, Mono isn’t supported by Ranorex. In addition, Ranorex needs access to certain parts of the OS that Mac does not allow. Locking down their systems, macOS hinders many Ranorex features that work on Windows systems.

While free tools such as Selenium and Watir are backed by a massive community, the Ranorex user base is much smaller. iDataLabs research shows that Selenium and Watir are used by 24,725 and 1,376 companies respectively, while only 954 companies are applying Ranorex. As a result, it might be difficult to find solutions to your problems and pieces of advice you’re seeking on the web. Users believe that the Ranorex team should work on organizing the community to share more plugins, problem-solving, etc.

While being one of the most popular test automation providers, Ranorex frequently releases new versions. This, in turn, takes up time for updating the existing suites of automated tests. While new releases isn’t something to complain about,  oftentimes it turns out that the new features are still unstable and contain bugs. That’s why it might be necessary to wait for the second update of a new version before making the change.