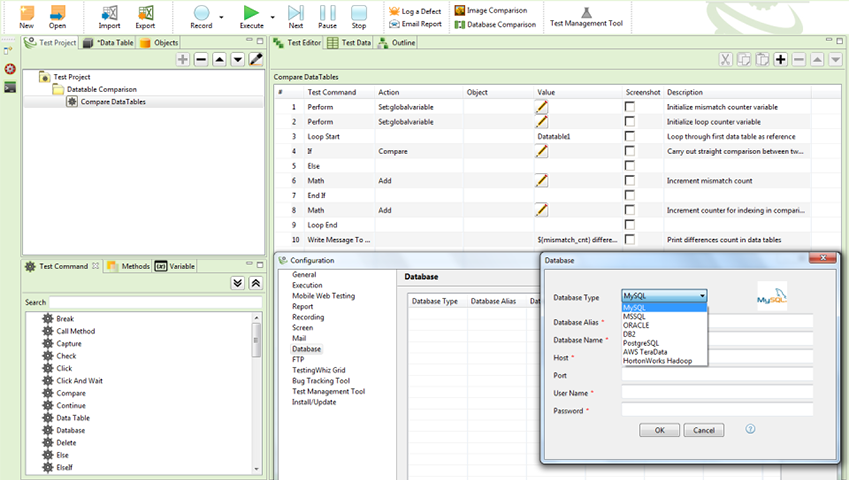 TestingWhiz is a Codeless Automation Testing Tool for Software, Web, Mobile, Database, Cloud, Web Services and API testing. It is pillared on a strong architecture combined with intuitive Automation Engine and short learning curve that promises to take your test automation to the next level .

FAST Object Recorder – The Object-Eye tool of the TestingWhiz speeds up test creation process by identifying Class, Xpath, Form Controls and Values of web-objects and stores them in the object repository for easy regression.

Inbuilt Test Data Tables (Data Driven) – Stores up to 500+ data table that help you use them across multiple test projects.

Formidable Test Scripting Features - Facilitates using operations like conditional loops (If, Else-if, If Else and If Not) to ease complex scripts. It even allows testers to group frequently used test cases and re-use them across multiple test projects.

Integrations for the Enterprise – TestingWhiz provides efficient results due to its integration with Defect Tracking Tools like Mantis, Fogcreek Fogbugz and Atlassian JIRA and Test Management Tools like HP Quality Center.

Internationalization – TestingWhiz allows you to customize the UI, scripts and reports into a language of your choice among English, Spanish, French, German, Italiano and Dutch.

Database Testing – Facilitates testing the complete application with connectors like Oracle, MSSQL, My SQL, etc. along with an ability to fetch database to placeholder and export the same to Excel or CSV.

Shorter Learning Curve - TestingWhiz offers enough goodies for the junior tester to get started and also packs in enough punch for the seasoned automation engineer which significantly cut down the learning curve.