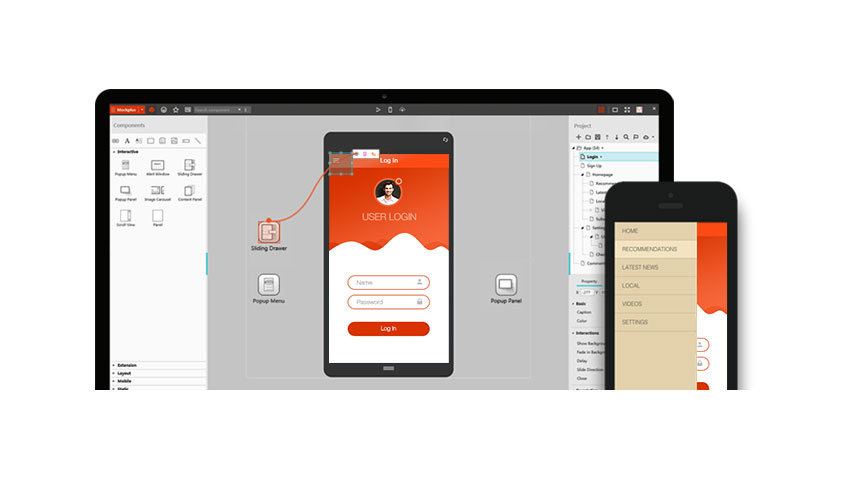 As an all-inclusive design tool for designers and developers, Mockplus can be used to create faster, smarter and easier website prototypes with simple drag-and-drop, supporting mobile and desktop apps prototyping too. With a singular mission to keep users focused on design itself rather than the tool, the software has offered a number of incomparable features to make better design and development.

A set of ready-made components (3000) and icons (200) are included for your rapid prototyping.

It offers not a few features to improve the design efficiency of making repetitive webpage elements and layouts, such as the Repeater, Auto Data Fill, Format Painter and Paste Style.

The most comprehensive way to preview and test out your project, including: Export to image, Export to demo package, publish to online and offline HTML, view on mobile app using QR code, etc.

Prototyping is a direct way to simulate user experience. A clickable prototype can not only be used to test product features, but also save participants’ time and lower resource consumption. One famous case study shows that prototype design can help to avoid around 25% bugs in product with its strict examination on product logic. Besides, prototype design also ensures the utility of visual design, making the latter complied with user experience fundamentally. All of these are undoubtedly benefits of prototyping.

Now we’re not satisfied with just prototyping but pursuing an easy and rapid prototyping way. This is, on the one hand, due to a higher requirement on efficiency, on the other hand, results from the fact that too much attention on details disturbs the logical fluency of designers, since logic goes first and details second in the stage of prototyping. Then what are exactly the benefits of rapid prototyping? Let’s see its definition first.

What is Rapid Prototyping?

Prototyping: the process that designers sketch the product framework with lines and graphics.

Benefits of Rapid Prototyping - Why Is It So Important?

Prototyping never exists in the overall product stage by chance, instead, it’s a good way to get information from users and stakeholders as soon as possible. Nowadays, not a single product team on earth can get rid of prototyping completely. Especially with prototyping gets easier and more affordable, its significance becomes more obvious and irreplaceable. Whether or not do prototyping is no longer a question anymore, how to make the most of the advantages of prototyping should be the right question worth thinking.

A quick view of prototyping

Just in case, it’s still necessary to define some basic items about prototyping.

First, have a look at the basic product stage:

PRD (replaced by prototyping for most occasions)

Well, I guess it clearly shows the role of prototyping in the whole production already. We create a prototyping model after doing enough UX research, including gathering idea, data, information, demands, evaluation, etc. When completed, prototyping is presented as a direct reflection and demonstration of how stakeholders and end-users can make function and interaction with any elements given.

Paper Prototype: printed or hand-drawn representation of the user interface of a software product

User Experience Prototype: represents enough of the appearance and function of the product

Visual Prototype: represents the size and appearance, but not the functionality

In this article, I’ll talk about prototype made by prototyping tools, which involves both user experience and visual aspect, and also is the most popular and practical one. Since I have been using Mockplus for years, I’ll explain how to make full use of the advantages of prototyping by using prototyping tool Mockplus.

What is a high-fidelity prototyping?

1)It consists of wireframe, interaction design, logical judgment and UI. It definitely cost more time and energy. However, despite all those surplus waste, it leaves a limited room for UI designers. The taste is even bitter when you have to redesign everything.

2) Wrong demonstration of prototyping may degrade your design thinking. that is to say, your whole design may left only 50% in front of your users or stockholders.

3) Misunderstanding of prototype and finished system from users. Especially for high-fidelity design, the user may have a limited thought cause they feel like this is how an APP works, so they can't feedback usefully.

4) Ignore feasibility. It’s simple to understand, some of your design may not work out during the real development stage.