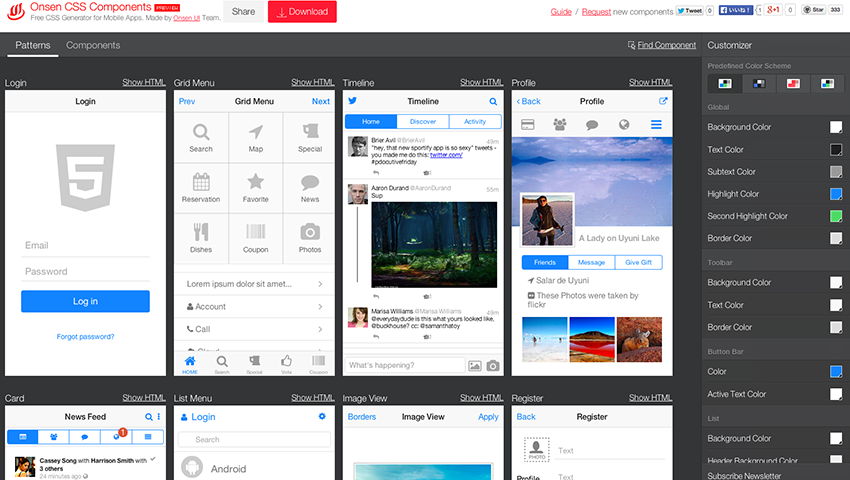 PhoneGap. It is easy to learn and powerful tool to create mobile apps.

Onsen UI provides a set of UI components and CSS styles to build web applications. It offers both Android and iOS look and feel and it gives the user an almost-native experience.

Onsen components are Javascript framework agnostic. You can use jQuery, AngularJS, Angular 2+, React, Vue.js or Meteor.

Onsen is also built on top of PhoneGap/Cordova to allow usage of the phone native features. They both are well known frameworks for mobile app web based development. Actually, Cordova is the open source version of PhoneGap. It was published by Adobe when it acquired Nitobi, the original owner of the PhoneGap.

When it comes to developing Mobile applications, a lot of web developers complain about learning native’s languages for building their amazing app.

And that because they are more expensive to work with, requiring a lot of experience, not the best for creating simple apps and they’re built for one specific platform.

Instead, many web developers prefer using web technologies which they already familiar with (HTML, CSS and JavaScript).

This is where Mobile JavaScript frameworks come to put an end to this misery.

Onsen UI is one those JavaScript Frameworks, an open source UI framework and Components, based on PhoneGap and Cordova. It allows you to create HTML5 hybrid and Mobile apps using Web Technologies like HTML, CSS and JavaScript.

When the version 2 came out, Onsen UI became a JavaScript framework-agnostic! What is that mean?

It means that developers can now create mobile apps with or withoutJavaScript Frameworks.

Now, because this is only an introduction to Onsen UI, the first question that might come to your mind is:

Why do you need to use Onsen UI Framework?

To answer on your question, let’s see some of the features of Onsen UI.

Although Onsen UI is a powerful tool to build complex mobile apps, however it’s easy to learn and work with.

A lot of resources concluded in the official documentation, large community forums to get answered for your question, interactive tutorials that make the learning process fan and effective. This is why Onsen UI simple and easy to use.

One of the reasons you should consider to use Onsen UI that it’s allows you to work with the technologies you already know and love like HTML, CSS and JavaScript to build beautiful HTML5 hybrid and mobile web apps.

Don’t worry about the font icons because Onsen UI supports iOS and Android Material Designc where you can style and change the appearance of your application base on the selected platform with the same code source.

No Need for Android SDK or IOS

One of the greatest features of Onsen UI is to build and package your apps without installing or configuring the Android SDK/IOS. Just type some snippets code and let the cloud handle the rest.

As I mentioned earlier, you can use Onsen UI with or without Frameworks. So…if you’re already familiar with one of these frameworks: AngularJS, React JS and Vue JS, etc. And you can jump straight to code your next big app! It’s as easy as a couple of clicks.

People are worried about the slower performance of some PhoneGap/Cordova apps when it comes to lower ends devices, but that won’t be the problem anymore.

The Onsen UI team has just got that covered

All the animations included in Onsen UI have been optimized and tuned to perform well on a wide range of devices.

Onsen UI team are also taking the matter of slow performance seriously, they ensure that all the applications created using Onsen UI are up and running smoothly even on lower devices.